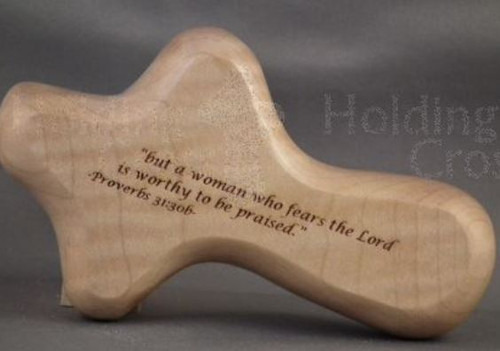 A special gift for a special woman.

The HoldingCrossTM  is made of American Soft Maple or Birch.  Engraved on one side is simply "Mom".  The other side of the HoldingCross is taken from Proverbs 31:30 "but a woman who fears the Lord, she shall be praised".

We decided upon Proverbs 31:30 for a few reasons.  The book of Proverbs is traditionally considered written mostly by Solomon, thought to be the wisest of men.  Wisdom and folly, wealth and poverty, pride and humility, live and death are all wrapped up in Proverbs.

It is interesting that the last chapter in the book devoted to comparing the important things of life closes with the capable wife and mother.  Some say that King Lemuel is Bathsheba's name for Solomon, her son. Lemuel means - belonging to God.  She probably thought that and prayed that of her son, Solomon.

The HoldingCross is made of American Soft Maple (which is considered a hardwood even though it has "soft" in the name). We include a special poem NoteCard.  It is  ready for you to surprise and honor that very special woman of God in your life.  The cross comes in an ivory organza bag.

Here is the first stanza ...

A Mother who Prays
By Jack & Carol Scott

There were those with royal heritage
Kingdoms and riches that decayed
I was blessed with a special lineage
I had a mother who prayed.

EHC : May The Lord Bless You Engraved HoldingCross