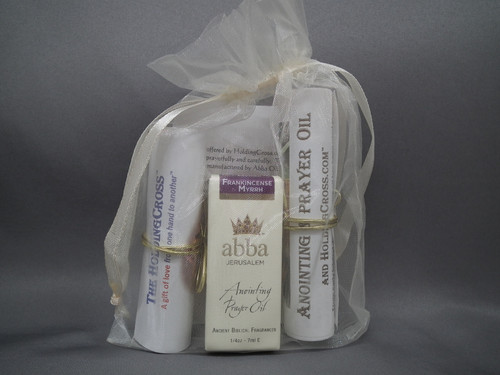 Frankincense was the sweet fragrance used on the Inner Altar of the Tabernacle.

Frankincense is a gummy resin from the non- descript Boswellia Thurigera. The deciduous tree is a low twisted, thorny shrub without a central branch. Today, almost all frankincense comes from Somalia, where the trees grow along the coastline, without soil, growing out of rocks.

Frankincense is highly fragrant when burned; it was used in worship where it was used as a pleasant offering to God. Medicinally it is seldom used now, though formerly it was much sought after. It was thought to be an antidote to hemlock!

Myrrh is also a gummy resin. This pale yellow resin, which dries to brown even black, is from the Commiphora shrub. The Commiphora shrub is a large shrub or tree found in East Africa, Yemen and the Red Sea countries. The shrubs yielding the resin do not grow more than 9 feet in height. The shrubs are sturdy with knotted branches that stand out at right angles. There are ducts in the bark, which fill with a granular secretion that drips when the bark is wounded or has natural fissures. The myrrh drips from the gray bark, forming irregularly shaped grains of resin. Dried myrrh is hard and brittle with a bitter taste.

The origins of myrrh and frankincense are traced to the Arabian Peninsula. According to Herodotus (5th century BC): "Arabia is the only country which produces frankincense, myrrh, cassia and cinnamon...the trees bearing the frankincense are guarded by winged serpents of small size and various colors." Diodorus Siculus writes, in the second half of the first century BC, that "all of Arabia exudes a most delicate fragrance; even the seamen passing by Arabia can smell the strong fragrance that gives health and vigor." He also mentioned gold mines so pure that no smelting was necessary. The Magi, carrying myrrh, frankincense, and gold, came from the East: Arabia. The frankincense trade route, with transport by donkeys and later by camel caravans, reached Jerusalem and Egypt from the Dhofar region of what is today Oman, through Yemen, turning north to follow the Red Sea coast. It is likely that the same or similar species of the resin-bearing plants grew across the Red Sea in the area that is now Somalia and Ethiopia, while the collection of the gum resins was initiated in Arabia.

Myrrh was one of the ingredients of the holy anointing oil and also of incense. It served as a fumigant in the temple and was a burial spice. Myrrh was valued as a perfume as well as for its medicinal properties. It served as local anesthetic and was given to both mother and child for postnatal care, perhaps one reason the Wise Men brought it to Jesus.

This oil, blended with these two fragrances, provides a classical anointing oil reminding us of our offering of self to the Lord and His purification of us by the work done at the Cross.