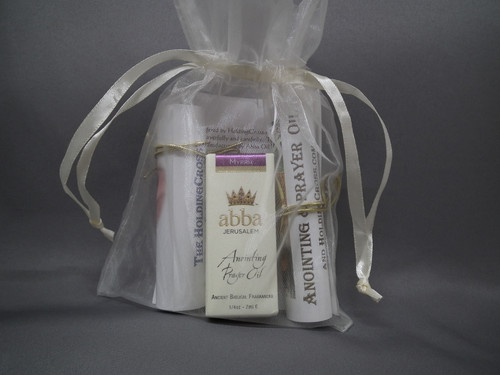 Queen Ester bathed in this oil for six months in preparation. Bitter to taste but sweet smelling, myrrh signifies dying to self and offering up a sweet fragrance to Him.

Myrrh is a constituent of perfumes and incense, was highly prized in biblical times, and was often worth more than its weight in gold. In ancient Rome myrrh was priced at five times as much as frankincense though the latter was far more popular. Myrrh was burned in ancient Roman funerals to mask the smell emanating from charring corpses.

In the New Testament, Myrrh was one of the gifts of the Magi to the infant Jesus according to the Gospel of Matthew 2:11. Myrrh was used as an embalming ointment and was used, up until about the 15th century, as a penitential incense in funerals.

In John's Gospel, Joseph of Arimathea and Nicodemus brought over 100 pounds of myrrh and aloe to the tomb to prepare the body of our Lord for burial.